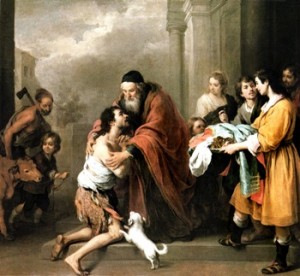 The Return of the Prodigal Son – Bartolome’ Murillo, 1670

I’m a sinner. We all are in our own way and to our own degree. It’s our nature. It’s called concupiscence.

It seems no matter how hard I try I can’t not sin. Oh, I can go for three or four straight weeks and only commit a few minor venial sins (or so I think), but inevitably, through my own conscious free will, I cave in to temptation or an old habit that hasn’t yet been completely unlearned; or I act rashly in a disrespectful or uncharitable manner which I immediately regret. It tears me up – mostly because I know what I did was wrong and, also, partly because it injures the pride I’ve built up for having worked hard to improve and sin less as time has passed.

When I do this I know that waiting until Sunday morning mass and asking for forgiveness during the Penitential Act just isn’t going to cut it. No, there’s only one thing I can do to get right with God – make a trip to Reconciliation on Saturday afternoon and humbly lay it on the line to Him. The guilt and shame weighs heavily enough on my conscience that I know it’s pointless for me to try to talk my way out of it.

It seems to me that my most serious falls from grace occur early in the week, on Monday or Tuesday. When that happens I have the rest of the week until Saturday to contemplate and painfully stew on the thing(s) I wish I hadn’t done. Why can’t I commit all my more serious sins on Friday night or Saturday morning?

Sometimes during those several days between sin and forgiveness I find myself creating elaborate excuses for why I did the misdeed. But, eventually, I always get to, and spend sufficient time at, the appropriate level of contriteness needed for my confession. This, I think, is one of the beautiful things about the Catholic Church. The Sacrament of Reconciliation is such a great gift. Confessing my transgressions to God while I’m physically looking into the eyes of a real person, forces me to be honest with myself, the priest, and especially with Him. If I couldn’t do that I’m sure I would fall victim to my own inventions, justifying that the onus for my actions belongs elsewhere instead of solely with me.

When I do visit the priest and confess my sins to God with a truly contrite heart, and promise to not sin in that way again, I am often surprised at the lenient penance given to me. I usually feel as though I deserve less mercy and I’m always grateful for the mercy I do receive. But, then, sometimes I believe that those few days during which I agonized over my sin until I could get to confession may have served as partial penance. At least I hope so.

Last week as I waited for Saturday to roll around, I made my usual Holy Hour of Adoration on Friday afternoon. The convenience of this dawned on me: it is the perfect, last chance opportunity to thoroughly examine my conscience, shed the excuses and take full ownership for my actions. After all, it would be just a little difficult, if not foolish, to not get it right while I’m kneeling in front of the Tabernacle looking up at Jesus, and Him looking down upon me.

During that quiet hour last Friday I took time to read from my daily St. Augustine devotional. I was a couple weeks behind so I picked up where I left off with the passage from June 4th entitled, “Pride Can Destroy”. St. Augustine wrote:

“Paradoxically, it is good, in a way, for those who observe continence and are proud of it to fall, so that they may be humbled in that very thing on which they pride themselves. What benefit is continence for us if pride holds sway over our lives?”

What can I say? I can’t make this stuff up. He knows what I need to hear! This was just another one of those God-moments I’ve come to expect while I’m at Adoration. I looked at the Tabernacle and thought what a great and merciful Lord we have. All He wants us to do when we are tempted to sin is to look to Him and ask for His help. So simple, but our human nature makes it so difficult to accept His will. And I thought, if this is the way He reveals the truth to me, then, if I’m going to sin, maybe it’s not such a bad thing after all to do so early in the week!

I continued to read my devotional. Each daily passage is followed by a prayer from St. Augustine. The prayer for June 5th read:

“Lord, You truly gave me free will, but without You my effort is worthless. You give help since You are the One Who created, and You do not abandon Your creation.” 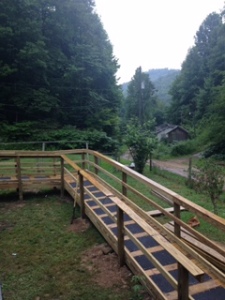 “You are the light of the world. A city set on a mountain cannot be hidden. Nor do they light a lamp and then put it under a bushel basket; it is set on a lampstand, where it gives light to all in the house. Just so, your light must shine before others, that they may see your good deeds and glorify your heavenly Father.” – Matthew 5:14-16 (NAB)

This reading, from The Gospel of Matthew, on Tuesday of this week, was a timely reminder for me and seven friends as we prepare ourselves for an immersion mission trip next month to Appalachia Kentucky. We hope that our actions, through our investment of some sweat equity into improving the living conditions of a few residents of Auxier and the surrounding Floyd County, Kentucky area, will, in a way, be the “light of the world” to those families.

This mission trip is a return visit for my friend, Clay, and I. We led a youth group last year from St. Francis de Sales Catholic Church in Lebanon, Ohio to Auxier, where we spent four days working with Hand in Hand Ministries helping to bring necessary improvements to the homes of several families in the community. That trip, our first time to do anything like it, was truly an enlightening experience for us. (You can read about our experience in Opening the Door Between Heaven and Earth). Clay and I were so taken by the love and generosity we experienced during those four days that we decided to make another trip this year to the same place, again working through Hand in Hand Ministries.

Unlike last year, however, we want to sow the seeds deeper within our home community and we are making this an adult mission trip. We have slots reserved for 15 adults and are encouraging others from the St. Francis de Sales and the Lebanon community to participate in the mission. We have eight adults signed up as I write this and we still need seven more to join us.

If you are interested in making a difference in the lives of others, in bringing the “light of the world” and hope to our brothers and sisters who really need it, please consider joining us. To sign up, or for more information, please respond by comment to this post.

If you are unable to join us for the trip but would like to participate by donating monetarily to the cause you can do so by visiting our fundraising page St. Francis de Sales Group to Build Hope in Appalachia. The cost to participate is $250.00 per person but, although there are many folks who would gladly give of their time and talent, they will struggle to afford the cost. Your donations will help ensure that we fill all our slots with men and women who are able and willing to provide an uplifting experience to many who are less fortunate.

Even if you choose not to participate, I ask that you please share this post with friends through your social media. I know there are many caring and generous people out there who will gladly help others help others. We just have to reach them.

Thank you for your help. God bless you. 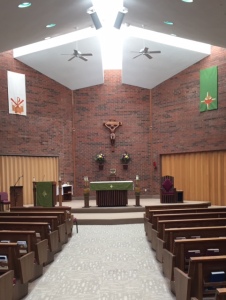 Our Lady of the Cove

I love going to new churches when I’m on vacation and away from home. This morning my wife, daughter and I attended Our Lady of the Cove Catholic Church in Kimberling City, Missouri, while we are vacationing at a family reunion. Our Lady of the Cove is a relatively small but beautiful church and it was packed to the gills this morning, the Feast of Corpus Christi. It seemed that many in the congregation were visitors like us. Even the priest was visiting from St. Louis while the regular pastor was on vacation.

As I was staring at the image of Christ hanging on the cross behind the altar, I heard the lector read this passage:

“For if the blood of goats and bulls and the sprinkling of a heifer’s ashes can sanctify those who are defiled so that their flesh is cleansed, how much more will the blood of Christ, who, through the eternal spirit, offered himself unblemished to God, cleanse our consciences from dead works to worship the living God.” (Hebrews 9:13-14)

To myself I prayed, “Lord Jesus, you gave Your life for me such that, through You, I have been redeemed and may have eternal life. Thank you!”

A few minutes later as I knelt after receiving Holy Communion, I also prayed, “Dear Jesus, You not only gave Your life for me, but now, through this Holy Eucharist, You give Your life to me so that I may be renewed in You.”

Then, in a moment of enlightenment, I realized, perhaps not for the first time but never more clearly, the connection between the two. The word, Eucharist, is Greek for Thanksgiving. By my acceptance of the Body and Blood of Christ in the Eucharist, His gift of life to me, I am declaring my thanksgiving to Him for His sacrifice for me.

I love being Catholic! I hope you do, too! God bless you.