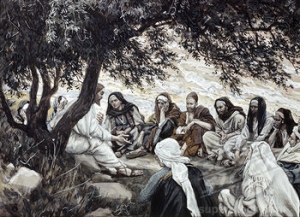 This week finds me on the road for business again, specifically in Nashville, Tennessee, for two days and nights. After a long day of meetings I chose not to join my co-workers this evening at the restaurant where we usually go because I didn’t want to overindulge on their generous portions and delicious food. I am trying to minimize the opportunities for temptation to seize me. So, instead, I decided to make a trip to Kroger and purchase a healthier and more appropriately sized meal.

On the way to Kroger I happened to pass by the Holy Rosary Catholic Church. This in itself was sort of a serendipitous event because, for a city the size of Nashville, there really aren’t very many Catholic churches. The sign out front announced there was a Wednesday evening mass at 6:00 p.m., which was only 20 minutes away. My first thought was how attending mass would be a wonderful way to de-stress and refresh from a day of learning we would have to do more with already stretched resources. My second thought was how once again, through a “God-moment”, He shows up just when I need Him.

I parked, found my way to the front door, and entered the church. I was the first one in the church other than the lector, who was practicing his reading, so I knelt and got some good prayer time in. When mass started I was one of nine people in the congregation.

The first reading came from 2 Kings but, between my hard-hearing and the lector’s soft voice, I failed to grasp most of the reading. Then, the pastor of Holy Rosary, Rev. Mark Hunt, delivered the gospel for the day, loudly and clearly such that I could hear each word:

“Beware of false prophets, who come to you in sheep’s clothing, but underneath are ravenous wolves. By their fruits you will know them. Do people pick grapes from thornbushes, or figs from thistles? Just so, every good tree bears good fruit, and a rotten tree bears bad fruit. A good tree cannot bear bad fruit, nor can a rotten tree bear good fruit. Every tree that does not bear good fruit will be cut down and thrown in the fire. So by the fruits you will know them.” – Matthew 7:15-20

Well, I don’t know about you but it always takes some dedicated effort on my part, or stooping to ask someone else, to get straight in my mind what Jesus meant in some of his parables. Just after I had resigned myself to stew on this later this evening, Fr. Mark delivered his homily with a message that helped explain it for me. I feel obligated to share with you the salient part of his homily in the best rendition I can muster:

“One day a man invited his boss to his home for dinner with him and his family. The boss was the type who had worked hard for his position but held himself in very high esteem and often let his employees know just how highly he regarded himself. After a fine dinner with the man, his wife and his son, during which the boss repeatedly expounded on his many accomplishments, the boss became aware of the boy staring at him. Not used to receiving this kind of treatment, the boss asked, ‘Excuse me lad, why are you staring at me?’ The son answered, ‘My dad says you are a self-made man.’ The boss, puffing up his chest, responded, ‘Yes, I am, but what is it about my success that is causing you to stare?’ ‘Well’, the son answered again, ‘I was just wondering why you made yourself such a jerk!’”

Thank you, Fr. Mark, for the lesson on the importance of humility, for explaining the difference between the good and bad trees, and the fruit that both bear. And, if I didn’t know better, I’d say you knew the boss I had back in ’95 and ’96!

“Heavenly Father, please forgive me for those times I have been a ‘rotten tree’ and have surely put on airs to impress myself and others. I beseech You to grace me with humility and a desire to serve others that allows me to be a ‘good tree’ from which may be harvested ‘good fruit’. Amen.”

(The post, The Rotten Tree, was first published in Reflections of a Lay Catholic)

“Likewise, the Spirit helps us in our weakness. For we do not know what to pray for as we ought, but the Spirit itself intercedes for us with groanings too deep for words.” – Romans 8:26

Photo credit: U Turn for Christ

As I sit down to write I know it has been a while since my last post – a full six weeks. It feels good to be back and even better to have the craziness of the last month and a half behind me.

As much as I like to write there are many other priorities in my life, whether I like it or not, that are either more important or more urgent than sharing my thoughts with you. On the up-side, over this six week period I have attended my daughter’s high school graduation, prepared for and hosted a graduation party, had the pleasure of family from out of town stay with us for several days, and hosted a party for some dear friends who are relocating out of state. On the down-side, I’ve fought the Ohio spring weather in trying to complete the spring clean-up of my property, and made many more business trips out of town than I normally do.

About a week and a half ago, after most of these things were behind me and the pressure was off, I “woke up” one morning on my way to the office and realized I had not prayed or had my daily conversations with Jesus in too many days. Then, I looked back and I realized those days had grown into weeks.

I spent the rest of the drive to work contemplating what had happened. I realized I had simply been caught up in the urgencies of so many things pulling me in different directions that I had let Him fall off my radar screen. Once I got past the sense of shame I felt a little bit of consolation in that I still had faithfully attended mass every Sunday (even though it was at four different churches), and spent an hour with the Lord during Adoration every Friday evening. As I parked my car I thought, “I’ll take some time later this morning and pray”.

Later that morning didn’t happen. I didn’t think again about praying until the next morning as I began my drive into work. Again, I decided I had let too many other things get in the way of my daily prayer. But, this particular morning, after deciding I needed to spend some time in prayer, I thought, “Where do I start? How do I come back?” And, then, before I answered those questions for myself, I was parking my car again.

Another 24 hours passed and I resumed the conversation with myself the next morning. But, the only answer I came up with was, “I don’t know where to start”. Frustrated, I vowed to think about it later, and I opted to listen to some music the rest of the way in to work.

I had the new CD from Jason Gray, Love Will Have The Final Word, in the stereo so I turned it on. One song was just ending and the next song, Begin Again1, began playing. About two-thirds of the way into the song the following lines caught my attention:

“It’s never too late for a new start / If you give God the pieces of your broken heart / When you come to the end, you can begin again.”

“Begin Again”. That was the answer. With those words, I knew it didn’t matter where I started or how I began “coming back”, just that I do start and I do come back. God doesn’t care how I do it, just that I do it!

Shortly thereafter I pulled into my parking lot and went to my office. Being a half hour early to work, I had time to pray, to “Begin Again”. I just started praying like I was having a conversation with an old friend I hadn’t seen in, well, six weeks or so. It felt good. It felt welcoming. I felt His Grace come over me and I thanked Him for taking me back. And, before I said, “Amen”, I thanked Him again for coming to my rescue in the way I’ve come to expect – through some mysterious and unexpected sign such as a timely song lyric or other phenomenon which most people would call coincidence. I know otherwise.

Later that morning as I was basking in the comfort of His love I wondered about all the people who drift away from God. How many of them start the same way I did, slowly, surely, and freely letting the busy-ness of life get in the way of maintaining their relationship with Him? How many drift too far away before realizing it, convince themselves they are too far out to sea to turn back, or forget their faith is their life raft that will keep them afloat? Too many, I’m afraid, forget the first step to beginning again is to whisper His name.

“Dear God, I thank you for Your gift of faith, for a heart to love You and a mind to know You, and for the courage and will to come back to You when I have drifted away from You. Lord, hear my prayer for everyone who finds themselves alone, that they may accept Your gift of faith, hear Your voice or see Your signs that are calling them home to You. Let me be a disciple who leads the way. Amen”

(The post, Beginning Again, was first published in Reflections of a Lay Catholic)