In today’s first reading (1 Pt 5:1-4) Peter exhorts the early Church leaders to be examples for their flocks, and Jesus will recognize their efforts.  A few years early, Peter confessed that Jesus was the Messiah (Mt 16:13-19) and set the example for the other disciples.  Jesus recognized him and established him as the rock upon which He would build His Church.

We don’t have to be bishops, priests or theologians to be good examples to our parish communities.  By living our faith with virtue we, too, can set an example and help others grow closer to Christ.  As with Peter, Jesus will reward us.

“Lord Jesus, I desire to live my life as an example for others.  Today I offer up my work, prayer, joy and suffering in union with Your sacrifice in the Holy Mass, and cheerfully accept the things I don’t like, did not choose and cannot change for the conversion of souls.  Amen.”

Ever since Easter the first readings of daily Scripture have been from the Acts of the Apostles and have been accounts of Peter speaking and healing in the name of Jesus. In healing the man who had been crippled from birth, he and John astonished the other Jews who were going into the temple for their three o’clock prayer (Acts 3:1-10).

Filled with the Holy Spirit (Acts 4:8), Peter went on to speak with great confidence to the people of Jerusalem and converted thousands in the process. In spite of being arrested by the Sanhedrin, thrown in jail, and almost sentenced to death by them, he continued to speak boldly (Acts 4:13, 29, 31) and bear witness with great power to Christ’s resurrection (Acts 4:33).

Certainly, seeing Jesus twice since His death; having Jesus explain the purpose of His crucifixion (Lk 24:45-47); and committing to follow Jesus by being reminded that he denied Him three times (Jn 21:15-17), brought about Peter’s complete conversion. His heart was fully convicted and his will completely committed to obeying the Lord to “go into the whole world and proclaim the gospel to every creature.” (Mk 16:15). Any fear he and the Apostles might have had was replaced with fortitude to speak boldly, and to rejoice when they were persecuted and suffered dishonor for the sake of the name [of Jesus]. (Acts 5:41).

In addition to this recounting in the Acts of the Apostles, we have also, this week, been reading about Jesus’ encounter with Nicodemus (Jn 3:1-21), a Pharisee and the teacher of Israel (Jn 3:10). Nicodemus came to Jesus one night after hearing about Him driving the money-changers out of the temple, and, more than likely, about His miracle at Cana. He questioned Jesus about His miracles, or signs, because he knew that they could only come from God. Jesus explains that the only way to enter the kingdom of God is to be born again by being baptized and receiving the Holy Spirit. Nicodemus doesn’t understand the concept of being born again and questions, “How can this happen?”

As many times as I’ve read this I always saw Nicodemus’ questioning as trying to catch Jesus in blasphemy so that He could be imprisoned. I had a vision of the learned Nicodemus on an ego trip, and, when the conversation was over, him walking away shaking his head in frustration and disbelief. But, I’m wondering if I was wrong. Maybe Nicodemus actually believed Jesus was who He said He was but his questions were simply an attempt to better understand.

At the end of the Gospel on Good Friday, we read in Jn 19:39 that, Nicodemus, the one who had first come to Him at night, also came bringing a mixture of myrrh and aloes weighing about one hundred pounds, and, along with Joseph of Arimathea, helped bury Jesus’ body. Why would he do that? A hundred pounds of myrrh and aloe must have been worth a significant sum. A hundred pounds seems to be a measure that might be fit for a King. Could Nicodemus have come, through faith, to accept Jesus as the Messiah?

Nicodemus appears one other time in Scripture, in Jn 7:50. The Pharisees had sent officers to arrest Jesus but they came back empty handed because they, too, were amazed at the way He taught. They were reprimanded and accused of being deceived by Jesus like they perceived the crowds had been. Nicodemus stepped up and asked his fellow Pharisees, “Does our law condemn a person before it first hears him and finds out what he is doing?”, to which he is ridiculed for forgetting that “no prophet arises from Galilee.” Could Nicodemus have been making an attempt to stand up for Jesus and protect Him?

I’m not a theologian and I haven’t consulted one on this subject. But, for the moment, I am going to assume that Nicodemus secretly believed, like Joseph of Arimathea, that Jesus was the Messiah. Maybe after that first encounter with Jesus and seeing the miracles He subsequently performed, Nicodemus came to believe that He was the Son of God. And, I’m going to suppose that he followed the doings of the Apostles after the resurrection and the Lord’s ascension and heard their witnesses. If that were true, then what would Nicodemus have said if he’d been asked if he believed in Jesus?

I think the fact that Nicodemus is never again mentioned in the New Testament indicates that he either never gave anyone a reason to ask him, or, if they did, he denied his belief. Admitting his belief would have been at odds with the rest of the Pharisees and certainly the Sanhedrin. He was a leader, a prominent figure in Jerusalem, and taking sides with Jesus and his rag-tag band of followers would have turned their entire law upside down. Believing in Jesus would have been tantamount to blasphemy and could have meant his death. He was, I’m sure, a wealthy man and, at a minimum, he would have forfeited many material possessions besides just his status and reputation.

Thus, as I pondered this all week, I concluded that if he did come to believe in Jesus as the Messiah, he kept it to himself. Whereas Peter, who had nothing to lose but his life, spoke boldly with courageous faith, Nicodemus could never even whisper a word for fear of losing the things of this world which he so esteemed.

And, therein lies the question I have to ask myself – at the risk of losing everything, would I be Peter and boldly proclaim Christ as my Savior and rejoice in the prospect of persecution, or would I be Nicodemus and, out of fear, remain silent?

What would you do?

“Lord Jesus, thank You for Your love. You know I love You. I pray that my love for You will always grow stronger. I pray that if the day ever comes that I may have to choose between life and my faith in You, that I have, like Peter, the courage to choose You. But, I know I’m weak, so mostly I pray that I am never put to that test. Amen.” 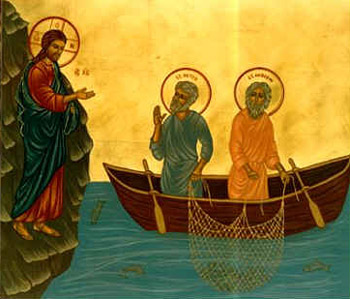 I love to fish. I learned from my dad. He taught me that fish don’t just jump into the boat. You have to present them with food that satisfies their hunger. And, sometimes the bigger fish aren’t always closest to shore.

Six years ago I went fishing for more happiness in my life. I met Jesus and I welcomed Him into my boat. He’s been teaching me how to be a fisher of men. He provides the bait and the Holy Spirit tells me where to cast and how to present it. Still, sometimes the deeper water scares me.

“Holy Spirit, help me to trust in You in all things. Give me the courage to venture out of my comfort zone of shallow water into the deep where the catch may be more abundant. Show me in each case, I pray, how to present Your truth so that it satisfies their hunger. Amen.”

(Daily 100:  Fishing was first published on the blog Reflections of a Lay Catholic)