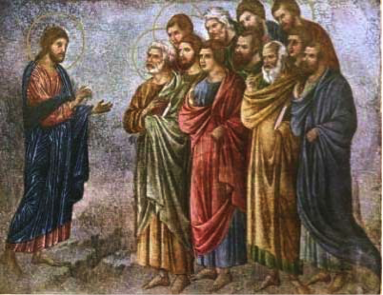 As I read and meditated on Tuesday’s Gospel,  I couldn’t help but wonder about a few things.

“In those days He departed to the mountain to pray, and He spent the night in prayer to God. When day came, He called His disciples to Himself, and from them He chose Twelve, whom He also named apostles: Simon, whom He named Peter, and his brother Andrew, James, John, Philip, Bartholomew, Matthew, Thomas, James the son of Alphaeus, Simon who was called a Zealot, and Judas the son of James, and Judas Iscariot, who became a traitor.” (Luke 6:12-16 NAB)

Did Jesus spend the night in prayer discerning which of His disciples He would choose to be the Twelve? And, if so, what criteria did He consider? Was He looking for the one with the greatest love for God? Or, the one who was most faithful? Or, maybe the one most loyal to Him? Perhaps the deciding quality was the ability and willingness to show compassion and mercy to others. Could it have been the ones who demonstrated love for their neighbors as they loved themselves? Or, was it the ones who had the greatest zeal to go out and spread the Good News?

One would think it would have been several or all of those things. But, then, maybe it was none of them.

And, did He learn from his prayerful conversation with God that night that Judas Iscariot would betray Him?

But, an even more important question came to my mind: “Would He have chosen me?”

In which of those qualities that, on the surface, would seem to have been the most important to Him, do I not measure up? Just a few? Or all of them?

It gives me something to pray about, to ask Him to show me where I should focus my attention.

Would you have been chosen? What would have excluded you?

“Lord Jesus, I love You and I desire to grow closer to You. I give You thanks for Your Mercy. I pray for the Grace to always trust in You, to always live the Father’s commandments, and to be Your voice, hands and feet in spreading Your Good News. Amen.”

4 thoughts on “The Choosing”