In yesterday’s post, A Joyful Hour, I said my wife and I are on another road trip from our home in Ohio to Kansas City and then on to Rapid City, South Dakota.  We made it to our daughter’s house safely Saturday evening, enjoyed a nice home cooked dinner and some special time with our two grandsons before they had to go to bed.  Our grandson Jack is 20 months old, and Eddie is two months old.  I slept well that night and I looked forward to the next morning and a full day of fun with the little guys.

When my first grandchild was on her way almost two years ago, my daughters asked what I wanted to be called as a grandfather. I had thought long about this and one thing kept coming to mind.  A friend from Lake Charles, Louisiana, who is a big duck hunter and retriever trainer, told me you should always name a dog with a one syllable name.  That way they can remember it easier.  Well, in my way of thinking this seemed like a good idea when it came to young children, too.  If I went by a one syllable name it would be easier for the little ones to remember it and say it.  So, I chose Pops.

When I awoke in the morning I said a quick prayer knowing that it was going to be a good day. I made it to the breakfast table, poured myself some coffee and waited for Jack to announce he was ready to get out of his crib.  Before long, my son-in-law, Joe, brought him down the stairs, stood him on the floor and the best thing ever happened.  Jack turned around, saw me, hollered, “Pops!”, and came running to me and gave me a hug.  What a fabulous way to start my day!

We ate breakfast and then dressed to go to Mass. While at our daughter’s we usually go to the Prince of Peace Catholic Church in Olathe.  But, Prince of Peace has been busting at the seams because of the growth in the south Kansas City area and the diocese has decided to build a mission church which will actually be closer to her house than Prince of Peace.  The name of the new parish has not been decided yet but we were thinking on the way there that it ought to be called Mother of Mercy parish.  Mother of Mercy, aka “MoM”, as opposed to “PoP” for Prince of Peace – get it?

This was the second Sunday for the mission church to celebrate mass in their temporary location -the gymnasium of the Madison Place Elementary School. The altar was set up on the stage with row after row of folding chairs on the gym floor.  Melinda, my daughter, Lisa, Jack, and I got there just in time to get seats.  The engineer in me quickly counted the number of seats in each row, multiplied by the number of rows and estimated the number of people standing in the back and I came up with roughly 550 in attendance.  Not bad at all for the second week of a mission parish! 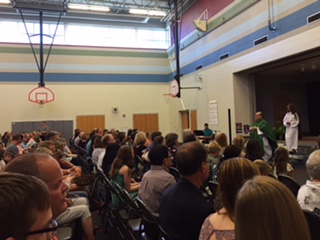 Until the parish officially gets its name it will be called the New Johnson County Catholic Church. But, I like MoM better so that’s what I’m going to call it for now.

The priest at MoM was a jovial and, I suspect, a very likeable young man. I thought he will probably be a good priest to draw the young families in the area into his flock.  I was particularly impressed with his homily about the Gospel reading for the day, Luke 15:1-32, which includes the parable of the Prodigal Son.  Although I’ve read this passage many times and heard several homilies about the Prodigal Son, today was the first time I ever fully understood why the brother was so upset about the attention the father was lavishing on the returned son.

I knew that the Prodigal Son, upon demanding his inheritance from his father, was basically wishing his father dead. The father, out of his love, gave his son what he desired.  But, it never occurred to me that the robe, ring, sandals and fatted calf which the father gave to the returning son came from what was left after he had been given his half, in other words, the half that was designated for the other son.  Seeing the situation from that perspective I thought how I might be a little upset, too, if I was the brother.  The priest explained that the father in the parable, when asking his son to celebrate and rejoice the return of his brother with him was actually asking him to forgive and be merciful.  I always thought the brother was just a selfish jerk.

Then, having broached the subject of mercy, the priest reminded us that it is the Jubilee Year of Mercy and what is expected of us during this time. But, what it did instead was play to my guilty conscience and reminded me that I wrote a blog post way back in March of this year about The Jubilee Year of Mercy and I promised that I would write more and elaborate on mercy, how we can be merciful and how God is merciful to us.  Here it is the middle of September and I still haven’t followed through on that promise.  I still have time I thought, and late is better than never.

The rest of the day was spent playing with Jack and holding and getting burped on by Eddie. We went to the Deanna Rose Farmstead in Overland Park where Jack got to see pigs, cows, horses, ducks and, his favorite, chickens.  Back at home, Lisa prepared a superb dinner; we Face-timed with our daughter Mary and her two month old son, Patrick, and our daughter, Sara, and her daughter, Elsa; and we wrapped up the day with a board game which I lost.  All in all, it turned out just as I thought it would when I rolled out of bed in the morning – perfect.

On Monday we plan to drive for about 12 hours to Rapid City, South Dakota to spend a week with more family. I’m looking forward to the drive, the time spent with Melinda, and the opportunity to contemplate how I can improve my relationship with Jesus. Pops is not looking forward to leaving Jack and Eddie behind but I know I will see them on the return trip in two weeks when we come back for Eddie’s baptism.  All in all, I know it will be another good day.

“Dear God, I give you thanks for all your many blessings: for family, and especially for children and grandchildren; and for the opportunity to see more of this magnificent country we call ours, a country in which we can still worship you freely like I did this morning.  Lord Jesus, I pray that tomorrow as I meet people on this road trip I will see You in them and that they may see You in me.  Holy Spirit, I pray that You will guide me and steer me away from any temptations that might come my way.  Amen.”

(Pops, MoM and Mercy was first published on the blog Reflections of a Lay Catholic)

4 thoughts on “Pops, MoM and Mercy”