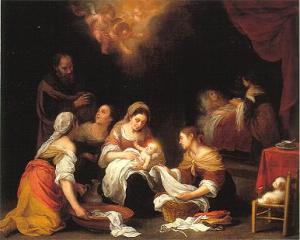 Birth of John the Baptist

In the Gospel of Luke 1:15-16, the angel Gabriel announces to Zechariah that he and his wife, Elizabeth, will have a son who will “be great in the sight of the Lord….He will be filled with the holy Spirit even from his mother’s womb, and he will turn many of the children of Israel to the Lord their God.” But, because of their age, Zechariah doubts this message from God and the angel strikes him dumb until the day his son is born. (Luke 1:20).

Yesterday’s gospel reading (Luke 1:57-66) recounts how, shortly after the boy is born and the house is filled with guests, Zechariah “asked for a tablet and wrote ’John is his name’, and all were amazed. Immediately his mouth was opened, his tongue freed, and he spoke blessing God.” (Luke 1:63-64).

Then, in today’s gospel reading, The Canticle of Zechariah, (Luke 1:67-79), Zechariah prophesies that a mighty Savior has been born, and that his own son, John, will be, “called the prophet of the Most High”, and will, “go before the Lord to prepare His way” (Luke 1:76).

I can’t help but believe, that during those nine months when Elizabeth carried John, Zechariah kicked himself a few times for his lack of faith. Not being able to talk must have been a burden. But, it gave him a lot of time to think about the angel’s message. And, most importantly, it created the perfect opportunity for Zechariah to listen to the voice of God, uninterrupted by his own speaking, which ultimately allowed him to utter his prophesy.

I don’t think I want to be struck dumb like Zechariah, but I know it would do me good to spend a little more quiet time with the Lord, to turn off my own voice and begin listening to Him to understand His message for me. Because I am traveling, I will miss my normal hour of Eucharistic Adoration this week. I need to build a substitute into my schedule.

Heavenly Father, on this eve of the birth of Your Son, help me to stop and spend at least a few minutes recounting the preparations I’ve made during Advent so that tomorrow will find me rejoicing like the shepherds coming down from the hills into Bethlehem. Amen.