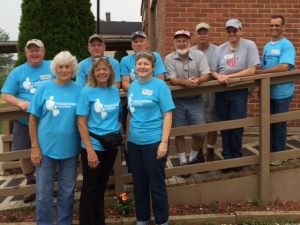 Sometimes my work prevents me from writing as timely as I would like and still be able to keep the topic relevant. Such has been the case the last three weeks but, I feel, this post is relevant regardless of the delay.

Three weeks ago I accompanied nine others from our parish on a three-day mission trip to Appalachia Kentucky where we worked with Hand in Hand Ministries – Auxier Center to improve the living conditions of three homes in Floyd and Johnson Counties. We joined nine men and women from Northeast Christian Church in Louisville, and the Hand in Hand staff, and together we made a difference. In the words of one of the homeowners, our work was “The Miracle” for which she had prayed. And, to quote one of our volunteers, “they were three of the most rewarding days I’ve ever experienced!”

Hand in Hand Ministries identified and staged the projects on which we would work. Shortly after we arrived in Auxier the staff described the work to be done and we signed up for the project of our choice. 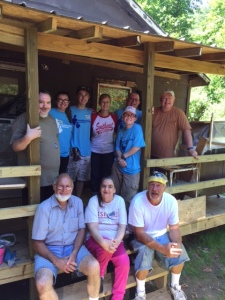 I joined with Bill from our group and, along with Vicki, Ben, Maureen, Joe and Sam from the Louisville contingent, we worked at Ms. Doris’ house. The old metal roof on her house leaked and caused the ceiling in a bedroom to deteriorate and sag; and the floors in that bedroom and in the bathroom had decayed and needed replacement.

I am always amazed at how the Lord puts the right people in the right place. Without any evaluation of skills, the seven of us fell into the part of the project that suited us best: three of us worked in the bedroom, a couple in the bathroom, and two more on the roof. It was a real-life application of Paul’s letter in 1 Corinthians 12:1-30, “18 But, as it is, God placed the parts, each one of them, in the body as He intended”. Directed as necessary by our crew leader, Joe, we worked “hand-in-hand” completing the work as three teams within a team. We helped each other, looked out for each other’s safety, and learned from and laughed with each other as we worked.

The work wasn’t easy. There was a lot of kneeling and a lot of overhead work. It was hot. The roof was steep. It was close quarters. But, it was fun and rewarding.

Perhaps the most rewarding part was building a relationship with Ms. Doris and her son, Matt, and hearing their story and their love for the Lord. I doubt they knew that their heart-warming smiles and humble gratitude inspired us to do our best.

When we finished on Saturday, my sore knees and tired shoulders didn’t feel so bad when Ms. Doris wrapped her arms around me and gave me a hug in appreciation for the work we had done. 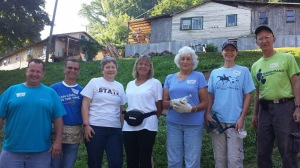 My wife, Melinda, joined friends Clay, Monica and Wyiona, as well as Lee and Dorothy from Louisville, and crew leaders, Alan and Jim, at Ms. Bertha’s house to remove and replace her roof, ceilings and insulation, and make other interior repairs.

I didn’t visit Ms. Bertha’s house but when we gathered at the end of the day back at the Center it was fun to listen to the memories created that day at her house. On Friday evening, Ms. Bertha joined us for dinner and left no doubt that she was the character I had envisioned her to be. She is one of the most humble, pleasant, and grateful people I have ever met. With respect to material things, and in comparison to us volunteers, she didn’t have much. But, she had a love for the Lord, she had food, would soon have a roof over her head that didn’t leak, and she had some new friends. In her mind she was rich. She stole our hearts and her attitude and gratefulness taught us all a thing or two. 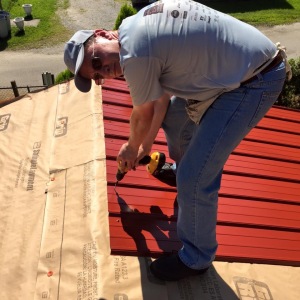 My friends Carl, Tom, Gary and Brian teamed up with Kevin and Tristan from Louisville, and crew leader, Jackie, and replaced the leaking roof on Ms. Elveeta’s house. Completing their work on Friday, they moved to Ms. Bertha’s house on Saturday to help continue the roof replacement there. I didn’t visit their project, either, but I knew from their conversation and their smiles at the end of each day that their efforts were also rewarding. 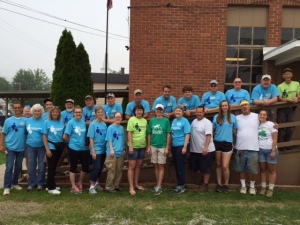 We built relationships with those we served, and also with our fellow volunteers. Whether it was on the job, or back at the Center during downtime, or dancing at the U.S. 23 Music Highway Museum on Thursday night, we took the time to listen, encourage, have fun, and get to know each other.

By Saturday afternoon we had completed the work to be done on two homes and the next crew to come would complete Ms. Bertha’s house. We had made new friends, some with whom we will keep in touch. We had taught others a few things and we learned a few things from them. We all left with more than that with which we arrived.

And, by Saturday afternoon, the ten of us from St. Francis de Sales were looking towards next year’s trip and thinking of other men and women we could invite to volunteer and experience with us the joy of serving and bringing Christ to others.

Two weeks ago as I was driving someplace on business, I began assembling this post in my head. I was listening to music and a familiar song came on the stereo, Better Way to Live1, by Christian artist, Jason Gray. It’s a good song and for the first time the lyrics really resounded with me and I realized they applied perfectly to our experience:

Helping others is, indeed, a better way to live!

Postscript: Thanks to our benevolent friends, family and fellow parishioners who donated generously to help offset the cost of the trip.