Back on 15 April my friend and co-contributor, Rich Brewers, posted How We Respond to Prayer Requests.  His post came just two weeks after my official conversion and entry into the Church.  I admit that, subsequent to reading his thoughts, praying for others was an action for which I only had about a year’s experience.  I simply didn’t know how to pray prior to the singular event which led to my decision to become Catholic. Any prayers I might have intended to offer before this time really couldn’t be considered to be much more than best wishes.

That event was my first Christ Renews His Parish retreat weekend.  During the weekend I had the opportunity to pray for others and be prayed over by others.  Not really knowing how to do the former, I chose to do the latter.  I had a compelling reason.  I had just returned the night before from an Easter week visit with family in Missouri.  My sister has a 14 year old daughter who is both mentally and physically handicapped.  With every visit I would leave saddened knowing that their struggles in life are incomprehensible to me, and frustrated that I didn’t know what I could do about it.  This had bothered me for a long time and, so, even though I barely knew these men, I asked them for their prayers for my niece, my sister, and for myself.  One of the men praying for me was Jim, the gentleman Rich referred to in his post.  I sat in the chair with his and other men’s hands on me and they prayed for the three of us.  In my heart I felt something happen in that chapel.  I wasn’t sure what it was but it was certainly nothing I had ever experienced before.  I was shaken.  I thought maybe it was simply the sincerity and love of these fine men.  But, I came to realize it was the Holy Spirit working through them.  It was such a powerful experience I decided to stick around and participate in the prayers for other men.  I’m not sure I can describe the feeling other than to say I found a tremendous sense of fulfillment in doing so. 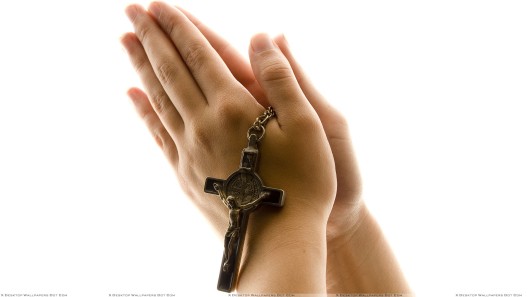 I believe one of the most difficult obstacles to asking others to pray for you is the fear of appearing weak or of lacking control.  What other obstacles might prevent you from asking someone else for their prayers for you?

Since that experience I have had several opportunities to pray for other people both with and without their requests.  I’m still not very good at it but I think I’m getting better.  I try to pay attention and learn from role models, like Jim and Rich, who make it seem so easy.  I’ve also learned that, like golf, to get better at praying you have to spend more time praying.  Thus, I usually have two or three intentions on my list at all times and I pray for them daily.  I find deep satisfaction in this.  Although I may not always see any direct results which can be attributed to my prayers, I have faith they are being heard and the intended recipient will be affected in some positive way.  And, somewhat selfishly, I find my time in prayer, even for others, allows me to get closer to Jesus.

But, there is another side to prayer requests – the side of requesting people to pray for you and your loved ones.  It’s not as easy as you might think it would be.  In many ways, it’s more difficult than responding to prayer requests from others.  Such was my case.  Up until about a month ago, I had been focused on praying for the needs of others.  I never really considered that I would have another significant reason to request their prayers.  But, then, one never expects the person whom you love the most to become ill with a disease that requires surgery and further treatment.  We discovered what a scary proposition it really is.  When we got the news, we, like many folks, thought we would keep it to ourselves.  No need to burden others with our situation, right?  We thought we might tell one or two people who ought to know.  But, then, we decided that sooner or later those one or two people would feel the need to tell someone else and eventually everyone who you didn’t want to burden would eventually learn of it anyway, or be hurt that they were the only ones who had not heard.  And, then, fortunately, we turned the table and looked at the situation from the outside in – what would we want if we were a friend or family member of the afflicted?  We realized that we would certainly want to know about it for no other reason than we love the person and would wish to pray for them and ask for Jesus’ intercession and healing.  We have a large family relatively speaking (pun intended), but our parish family of loved ones is much larger.  After realizing we could use all the requests for divine assistance we could get, we decided to let the cat out of the bag.

Have you ever found yourself in a situation seemingly out of your control and hoping for a miracle?  Have you kept it to yourself?  Or have you sought prayers from others?

Spreading news like this via word of mouth, especially through people who you know love and care about you, is a wonderful thing!  It doesn’t take long.  By the time I got around to making the official request to be added to our parish’s prayer chain, most folks already knew and had been praying for a while.  How do we know?  We can feel it.  It is the sense of peace that has come over us, the sense that everything is going to be alright, and the feeling that we are in Good Hands.  It is in the comforting smiles and the reassuring hugs.  It is a feeling borne from knowing that so many people have said rosaries, novenas, offered personal prayers, fasted and made other sacrifices on our behalf.  It is the collective, confident assurance from an entire faith community who seem to be saying they have inside information.

If you have requested others to pray for you for personal reasons, how did you feel?  Was your faith strengthened?  Were you comforted?

Thus, here we are on the eve of the prescribed surgery and I believe we could not have a more positive outlook, feel more at peace with the outcome, or more accepting that this is just a bump in the highway of life.  We know we have our immediate families and our extended parish family and friends who will all be pulling for us tomorrow.  We have faith in God and the healing power of prayer.  Please know that your love and heart-felt prayers are indeed felt and appreciated.  We love you.

God Bless you all.

14 thoughts on “The Other Side of Prayer Requests”