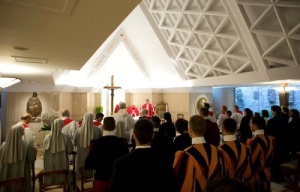 Vatican City, May 3, 2013 / 08:29 am (CNA/EWTN News).- In keeping with his style, Pope Francis cautioned about the dangers of a lukewarm faith by telling a childhood story on the importance of believing in the physical resurrection of Jesus.“I remember, excuse me, a personal story,” he said during his daily morning Mass on May 3.“As a child, every Good Friday my grandmother took us to the Procession of Candles and at the end of the procession the recumbent Christ came and my grandmother made us kneel down,” he recalled.“She told us ‘children, look, he is dead, but tomorrow he will be risen!’” he said.Pope Francis concelebrated the morning Mass with Archbishop Claudio Maria Celli, the president of the Pontifical Council for Social Communications and other priests.Around 35 Swiss Guards and their commander Daniel Rudolf Anrig were among the approximately 50 guests invited to attend the Mass.The Pope explained that his grandmother’s remarks were the vehicle that allowed his “faith in Christ, crucified and risen” to enter his heart. “In the history of the Church there have been many, many people who have wanted to blur this strong certainty and speak of a spiritual resurrection,” remarked the Pope.But this view is wrong because “Christ is alive,” he insisted.In contrast with this deep faith is a lukewarm one that results in only “the courage to get involved in our small things, in our jealousies, our envy, our careerism and in selfishly going forward,” he noted.“But this is not good for the Church, the Church must be courageous!” he exclaimed.“Lukewarm Christians, without courage … that hurts the Church so much because this tepid atmosphere draws you inside,” the Holy Father warned.The consequence of this is that problems “arise among us, we no longer have the horizon or courage to pray towards heaven or the courage to proclaim the Gospel,” he stated.Pope Francis pointed to prayer as the antidote to this kind of timidity.“We all have to be courageous in prayer, in challenging Jesus!”“Jesus, to put it in stronger terms, challenges us to prayer and says ‘whatever you ask in my name, I will do, so that the Father may be glorified in the Son,’” he said.The pontiff noted that “this is really powerful” and that “we must have the courage to go to Jesus and ask him to do it.”“Do we have this courage in prayer or do we pray a little, when we can, spending a bit of time in prayer?” he asked the congregation.The Swiss Guard will swear in 35 new recruits on May 6 at the Vatican and the Holy Father offered those at the Mass a special greeting, telling them that their service is “a beautiful testimony of fidelity to the Church” and “love for the Pope.”